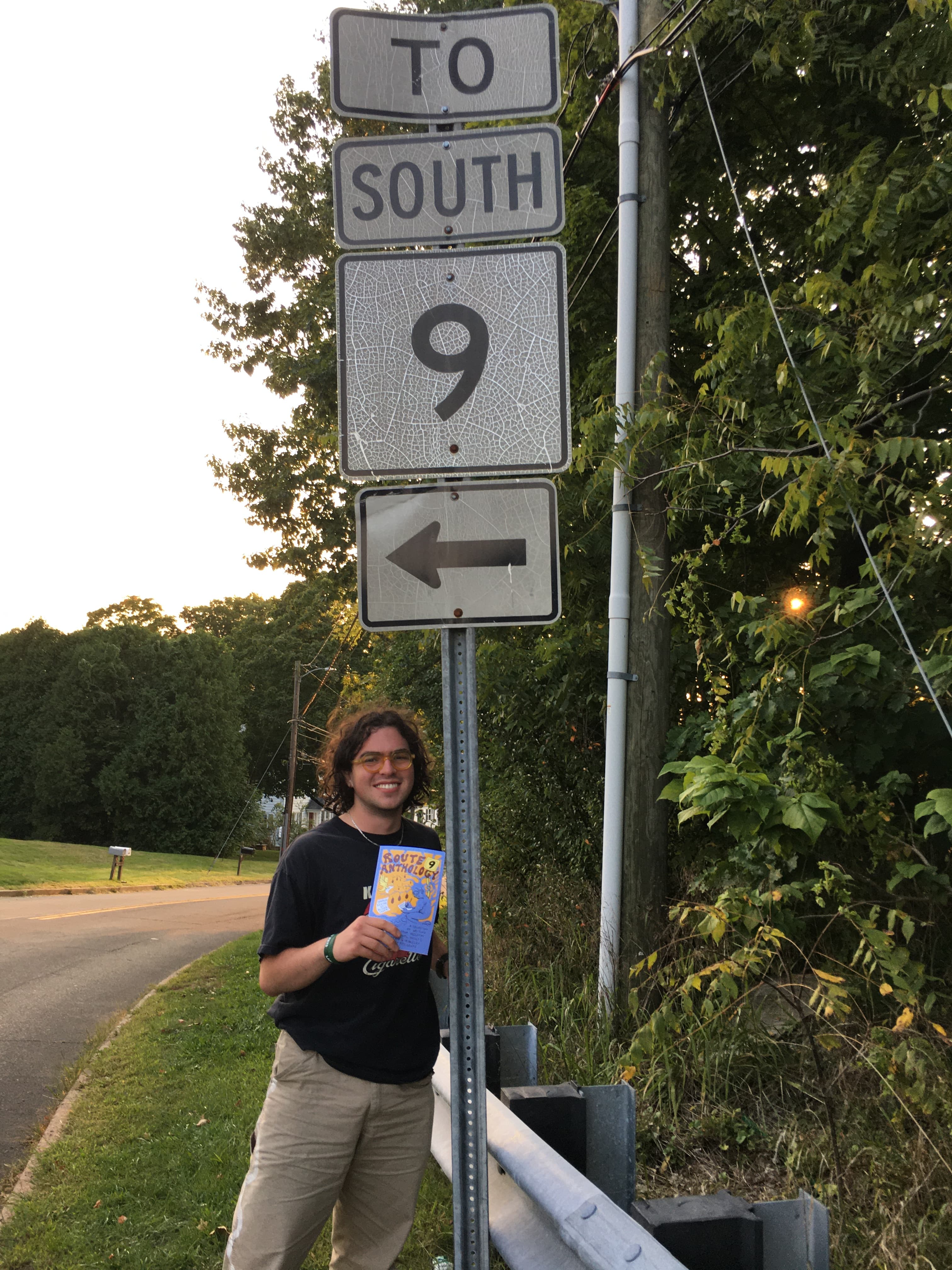 Oliver Egger ’23 is undoubtedly a Wesleyan personality. During his four years at the university, Egger founded the Route 9 Literary Collectivemanaged several literary projects within the collective, compiled and edited Route 9 Anthology, published by Wesleyan University Press. Egger sat down with The Argus to talk about his experiences with the University’s literary scene, rebuilding the community after COVID-19, and the importance of screwing it all up.

The Argous: Why do you think you were nominated to be a WesCeleb?

Oliver Egger: Well, what a question. I mean, it’s the honor of a lifetime. Nothing will ever be better than this victory for me. I’m a bit outward-looking, I guess. I do a lot of literary things on campus with the literary collective Route 9 and The Lavender. Other than that, I really don’t know. Maybe I’m just some kind of Wesleyan personality. I do not know. I am honored though.

A: What is a Wesleyan personality?

original equipment: Just a character, a clumsy little character. I’m just doing a bunch of random stuff, being really excited about getting people to submit poetry and writing. And I organize a lot of events, [so] people of different classes [years] could recognize me. I feel like it’s kind of a Wesleyan personality.

A: What drew you to majoring in English and minoring in religion?

original equipment: I’ve always loved poetry and creative writing, ever since I was little. My dad made me memorize poems when I was eight to buy a bike. I had a love for [literature] from. I knew when I came to Wesleyan that I was probably going to study English.

And there are a lot of amazing teachers in the English department. [Associate Professor of English] John Murillo [is] on sabbatical this year, but I really recommend everyone to take a course with him. [Associate] Teacher [of English Marguerite] Nguyen and [Assistant] Teacher [of the Practice in Theater Edwin] Sanchez was really supportive and reminded me how much I love English, reading and writing. And teacher [of English Stephanie] Weiner is awesome too.

[The] religion [minor] was kind of a shock. It certainly wasn’t part of the plan, but I’ve always been very interested in studying, learning, [and] reflection on Judaism and Christianity. I grew up in the South around mostly Christian communities. I was really interested in thinking, “How does Christianity affect how people view politics and culture?”

I have always been very interested in Christianity as a Jewish person. And I just had a few good overall classes there. It’s a very different way of thinking than majoring in English. [It] kind of defies me. I appreciate that about it.

A: You’ve sort of already started answering this question, but are there any particular classes and/or teachers that significantly influenced your time at Wesleyan?

original equipment: I would say [“Advanced Poetry Workshop: Radical Revision”] with John Murillo certainly had a huge impact on me.

Teacher [of Russian, East European, and Eurasian Studies Susanne] Fuso [is] just the best. I took that class with her, I think it was last year, and it changed my life. He’s a Wesleyan personality. It’s a legend. I love it.

by Professor Nguyen [“Kill Anything That Moves: The Vietnam War in Literature and Film”] is a kind of known classical class. I took the course on Zoom, and it was still so engaging.

A: You founded the literary collective Route 9. Can you tell us about your inspiration for doing this and your experiences with it?

original equipment: When I arrived at Wesleyan in the fall of 2019, the campus was quite different from what it is now in terms of the literary scene, as COVID had not yet arrived. There were all these literary journals that no longer exist and the clubs that no longer exist, it’s quite sad. So my freshman year, I was like, “I want to do something with a literary magazine. But I want to do something unique or different. And I met [Emeritus Professor of English] Tony Connor, and him [had] began this theatrical organization which included at least one Middletown resident, one Wesleyan teacher, and one Wesleyan student in each production.

I thought that was a really cool idea. So I came up with this idea called Route 9 Magazine, a Wesleyan publication that would include the work of all three groups. Then COVID happened, and when I came back, I was like, “Wait, there are no other posts on campus. There is no ongoing Wesleyan literary magazine…. Wait, wait, wait, wait, wait. It can’t happen.

Then I set up the literary collective Route 9 and The Lavender. I started Poems of our Climate, which is now touring The Argus, [managed by] Sofia [Baluyut ’23]. I was able to achieve my main goal, which is to do the Route 9 anthology, a Middlesex and Wesleyan county-wide book of writing published by Wesleyan University Press in September.

Now there are so many committed, thoughtful people involved that I can be a lot less involved. Anything people want to start again, we help literary magazines get started. I just wanted to revitalize the Wesleyan literary community because I was sad to come back and see we were all in shock. I think [the literary community is] one of the best parts [of Wesleyan].

original equipment: That’s the point. I was talking to someone from The Lavender and they were like, “Oh, was it stressful taking over?” I was like, ‘I didn’t take over. I just did it. I think it’s a really weird opportunity that I had. He came out of a very bad situation, which is COVID. We [had to have] a reset because these two promotions have graduated and no torch has been passed. All the torches have been blown out. We have this opportunity to rebuild a community here, all in the same vein of perpetuating Wesleyan literature and literary tradition.

A: What legacy would you like to leave behind?

original equipment: The most obvious answer is that I want these posts to continue and [be remembered for] help revitalize and create spaces for our whole community to come together.

But I also hope that people will remember me through this article. I want people a few years from now to be like, “Wow. Oh my God. Which guy. What a lost Wesleyan legend. It’s a joke.

But for real, just, [maintaining] publications and continue to have these spaces [carry] meaning and value. I feel like my legacy was that I really helped us [give] these incredible spaces for writers to present their work.

A: If you could have dinner with any author, living or dead, who would it be and why?

original equipment: I’ll say two. I will break the rules. We are going to make two possible worlds. A world is the world where I speak German, and that would be the poet Rainer Rilke. He seems like an incredibly inspiring person for a young poet. I mean, [Rilke’s] “Letters to a Young Poet” is already doing this. I feel like he could teach me a lot about writing, building community, and caring for others. He’s just a deeply empathetic person.

But in the alternate universe where I can’t speak [German], I think it would probably be James Baldwin, just because he was the writer who made me read it. I read “If Beale Street Could Talk” when I was in sixth or seventh grade, and I was like, “Okay. That’s what I like.

And I also think he had his finger on the pulse of America and what it’s like to be a person of color in America, or what it’s like to be a poet in America, what it is to be a human in America and in the world. I would like to hear him talk to me for nine hours about everything he thinks about our world today. There is no one like him. I don’t think there will be any for a very long time.

A: Do you have any advice for current and future students?

original equipment: There are obvious ones like, “Talk to your teachers, be their buddies.” There are so many great teachers and there are lots of people who want to support you and care about you.

But I think what I wish I had heard in first grade is [that] the stakes are not that high. Everything will be alright. And the most important is [to ask] “Are you surrounding yourself with relationships that make you feel good? And are you doing whatever work that makes you feel empowered or makes you feel like you’re contributing to that community? »

If your answer is no, no matter how [the] the grades you get [are]. You will never have the experience of being in a place like Wesleyan again. Wesleyan is a truly unique and special place. [Ask] “How can I take the resources here and grow here?” without being like, “Oh my God, if I fail somehow, it ripples through me as a whole.”

A: What are your plans beyond Wesleyan?

original equipment: I have all these dreams and visions for me as a writer in the world, which [are] hope true. But the bottom line is that I want to be surrounded by a community and people that I love next year. I don’t want to be singled out for some kind of influence or some kind of idea that if I don’t do this thing, it’s over. It is not finished. It’s a long road. It’s something I really want to prioritize for myself.

I’m applying for a few master’s programs in poetry, but I think it’s more likely than not that I won’t be admitted or I’ll defer for a year.

I don’t know what kind of work I’m likely to do, but I work at Wesleyan University Press and really enjoy editorial work. So I could see if I could be an editorial assistant at another university press or something.

I will be sincere with you. It’s still a little out of date. But I know I just wanna be around a community [and] poetry, and I try not to panic about it. ‘Cause I don’t really think [that’s] useful.

This interview has been edited for length and clarity.

Kat Struhar can be reached at [email protected]

We cannot allow our education to be automated