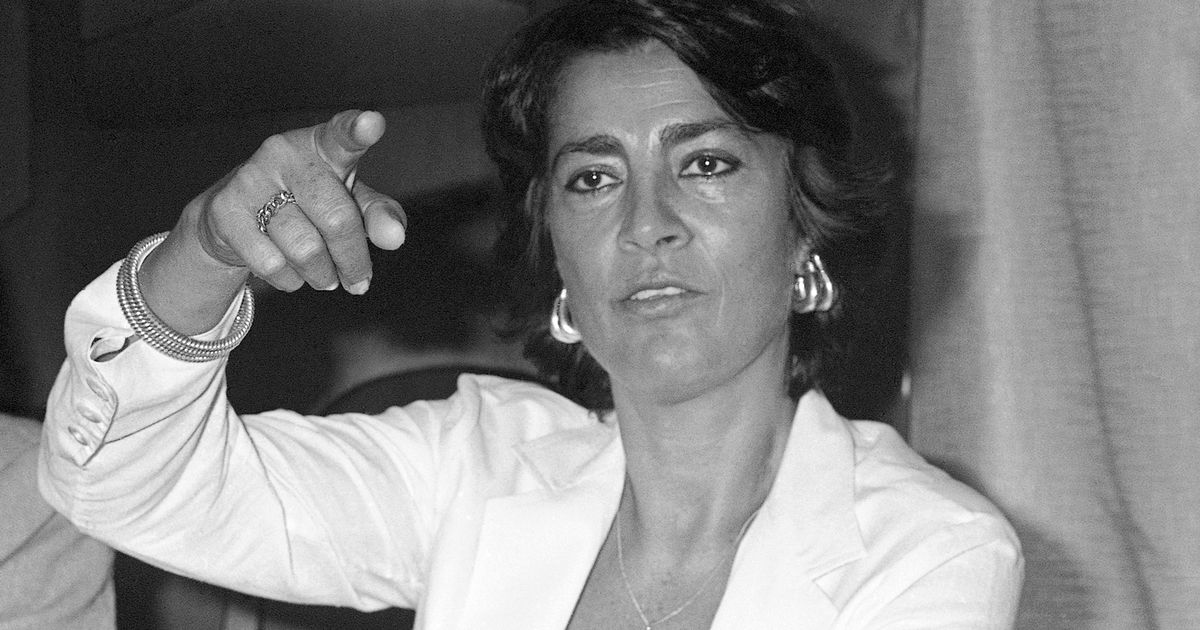 Irene Papas, 96, a Greek actress who starred in films such as ‘Z’, ‘Zorba the Greek’ and ‘The Guns of Navarone’ but achieved the greatest success of her career playing the heroines of Greek tragedy, is died Wednesday.

In “Zorba the Greek” (1964), with Anthony Quinn, she was a Greek widow stoned by her fellow citizens because of her choice of lover. In Costa-Gavras’ Oscar-winning political thriller “Z” (1969), set in the Greek city of Thessaloniki, she plays the widow of Yves Montand, who conjures up the film’s meaning with one last distressed gaze out to sea.

But during the same decade, Papas made a name for himself in Greek film versions of classic plays, often directed by fellow countryman Michael Cacoyannis, who also directed “Zorba.” She played the main characters in “Antigone” (1961), Sophocles’ story of a woman who pays dearly after fighting for her brother’s right to an honorable burial; and in “Electra” (1962), in which she and her brother plot matricide. She was also the mother of Electra, Clytemnestra, in “Iphigénie” (1977), the drama of a girl offered as a human sacrifice.

Ken Starr, January 76, the independent attorney whose investigation uncovered a White House sex scandal that shocked the nation and led to the impeachment of President Bill Clinton for lying under oath and obstructing justice, died on Tuesday in a Houston hospital. His wife, Alice Starr, said he died following surgery, but gave no further details.

For a time, Starr was a household name, and his investigation into Clinton’s affair with a former White House intern, Monica Lewinsky, propelled issues of gender, morality, responsibility and ideology to the center of American life for over a year. His investigation tested the limits of the Constitution as it prompted the first impeachment of a president in 130 years and marked Clinton’s legacy and his own. Starr has made headlines again for representing billionaire financier Jeffrey Epstein when he was charged with sex crimes against young girls in Florida. He also mentored Chief Justice John Roberts and Justice Brett Kavanaugh.

Jean-Luc Godard, 91, the iconic “enfant terrible” of the French New Wave who revolutionized popular cinema in 1960 with his first feature film, “A bout de souffle”, and figured for years among the most influential directors in the world of cinema , died on Tuesday at his home in Rolle, Switzerland. His longtime legal adviser, Patrick Jeanneret, said Godard died by assisted suicide, having suffered from “multiple disabling pathologies”.

In a long career that began in the 1950s as a film critic, Godard was perhaps the most innovative director among New Wave filmmakers who rewrote the rules of camera, sound and of storytelling – rebelling against an earlier tradition of more stereotypical storytelling. “A bout de souffle”, with Jean-Paul Belmondo and Jean Seberg, is perhaps still the best known of his works.

Ramsey Lewis, 87, a jazz pianist who unexpectedly became a pop star when his recording of “The ‘In’ Crowd” reached the Top 10 in 1965 – and who remained musically active for more than half a century after that – died Monday at his home in Chicago. The cause was not available.

Lewis was well known in jazz circles, but little known elsewhere when he and his trio (Eldee Young on bass and Redd Holt on drums) recorded a live album in May 1965 which included an instrumental version of “The ‘In ‘Crowd’. It peaked at number five on the Billboard Hot 100 and won Lewis the first of his three Grammy Awards. (The others were for the 1966 album track “Hold It Right There” and a 1973 re-recording of “Hang On Sloopy”.)

He was considered for years Spain’s leading candidate to win the Nobel Prize in Literature since Camilo José Cela received the honor in 1989. Marías was elected to the Royal Academy of Spain, the highest literary authority and linguistics of the country, in 2006. Winner of several international fiction awards, he was professor of Spanish literature and translation at Oxford and at Wellesley College in Massachusetts in the 1980s.

William Klein, 96, an American photographer whose innovative style of portraiture strongly influenced fashion and street photography in the second half of the 20th century, died on September 10 in Paris. In 1954 Klein turned her attention from painting to photography after meeting Alexander Liberman, the artistic director of Vogue, and began a 10-year collaboration with the magazine. During this period, he created a groundbreaking photographic diary of his native New York, titled “Life is Good and Good for You in New York.” The book showcased Klein’s unconventional use of wide angles, contrasts in composition, and unusual framing, which came to define the still-nascent genre of street photography.

He was also an acclaimed filmmaker, producing several documentaries and feature films throughout his career, tackling subjects such as the fashion industry, the war in Vietnam and the famous boxer Muhammad Ali.

Marsha Hunt, 104, one of the last surviving actors of Hollywood’s so-called Golden Age of the 1930s and 1940s, who worked with artists ranging from Laurence Olivier to Andy Griffith in a career disrupted for some time by the list black woman from the McCarthy era, died on September 7. in Los Angeles. She arrived in Hollywood in 1935 and over the next 15 years starred in dozens of films, including the adaptation of Jane Austen’s “Pride and Prejudice” starring Olivier and Greer Garson. In her later years, she became an activist, highlighting the plight of refugees and the homeless.

Rommy Hunt Revson, 78, the inventor of the scunci, better known as the Scrunchie, the ubiquitous and inexpensive hair accessory of the late 1980s and 90s that was worn by millions of women, including stars like Madonna , Janet Jackson, Demi Moore, Sarah Jessica Parker and the Olsen twins from the sitcom “Full House,” died Sept. 7 in a hotel room near the Mayo Clinic in Rochester, Minnesota, where she was being treated for Cushing’s disease and Ehlers-Danlos syndrome. The cause was a rupture of the ascending aorta. She lived in Wellington, Florida, near West Palm Beach.

Art Rosenbaum, 83, an acclaimed painter and folk musician for half a century of field recordings of American vernacular music, including Appalachian fiddle tunes and ritual music brought from Africa by slaves, died September 4 in a hospital in Athens, Georgia, his adopted hometown. The cause was complications from cancer.

In 2007, Atlanta-based label Dust-to-Digital released the first of two compilation boxes from Rosenbaum’s treasure trove, “Art of Field Recording Volume I: Fifty Years of Traditional American Music Documented by Art Rosenbaum”, which won a Grammy Award for Best Historical Album. Pop music website Pitchfork called the release “revealing” and “an indispensable counterpoint to Harry Smith’s ‘Anthology of American Folk Music,'” a reference to the 1952 compilation of songs that remains a canonical touchstone for folk musicians.

Gwendolyn Midlo Hall, 93, which after years of excavations in obscure libraries in Louisiana, Spain and France succeeded in rescuing the identity of more than 100,000 slaves from archival oblivion and demonstrating the vast extent of African influence on American Cultural Heritage, died August 29 in Guanajuato, Mexico, about 200 miles northwest of Mexico City. Her son Haywood Hall said his death, at his home, came after a recurrence of breast cancer and a stroke. Hall led a colorful youth as a civil rights activist and spent most of her college career at Rutgers University, where she taught Latin American history.

William “Bill” Dygert, 71, a longtime land use consultant active in conservation efforts in southwest Washington, died Aug. 27 at his home in Astoria, Ore., of a lung disease chronic. Dygert was a founding member and longtime board member of the Vancouver, Wash.-based Columbia Land Trust, which has conserved over 55,000 acres in Oregon and Washington State.

Dygert, who grew up in Vancouver, started working for the Clark County Parks Department in 1973, first as an employee and then as an independent contractor. He negotiated with private landowners and obtained funds to enable the conversion of their private properties for public purposes. Through his grant writing, Dygert has secured millions of dollars for municipalities and nonprofits in southwest Washington, according to an obituary in The Columbian.