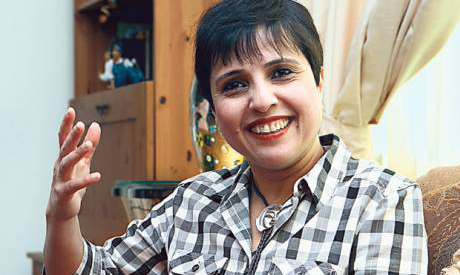 Palestinian writer Huzama Habayeb was announced as the winner of the 2017 Naguib Mahfouz Medal for Literature for her novel Makhmal (which means velvet in English).

Habayeb, 52, is a Palestinian writer and poet, she was born on June 4, 1965 in Kuwait. She now resides in the United Arab Emirates.

The announcement was made during an award ceremony at the American University in Cairo.

The prize is awarded annually on December 11, Mahfouz’s birthday, and consists of a silver medal, a cash prize of $ 1,000, as well as an English translation and publication of the winning novel by AUC Press.

Novels are eligible if they are published in Arabic but do not yet have an English translation.

The Naguib Mahfouz Medal for Literature is sponsored by AUC Press, the publisher of some fifty books in English by Naguib Mahfouz.

The publisher has around 200 titles of Arabic literature in translation in its catalog.

In 2011, the prize was awarded exceptionally to â€œthe revolutionary literary creativity of the Egyptian people during the popular uprising which began on January 25â€.

Hindi Divas: All About Love for Literature Books

Why is the spirit of experimentation absent from the literary arts?