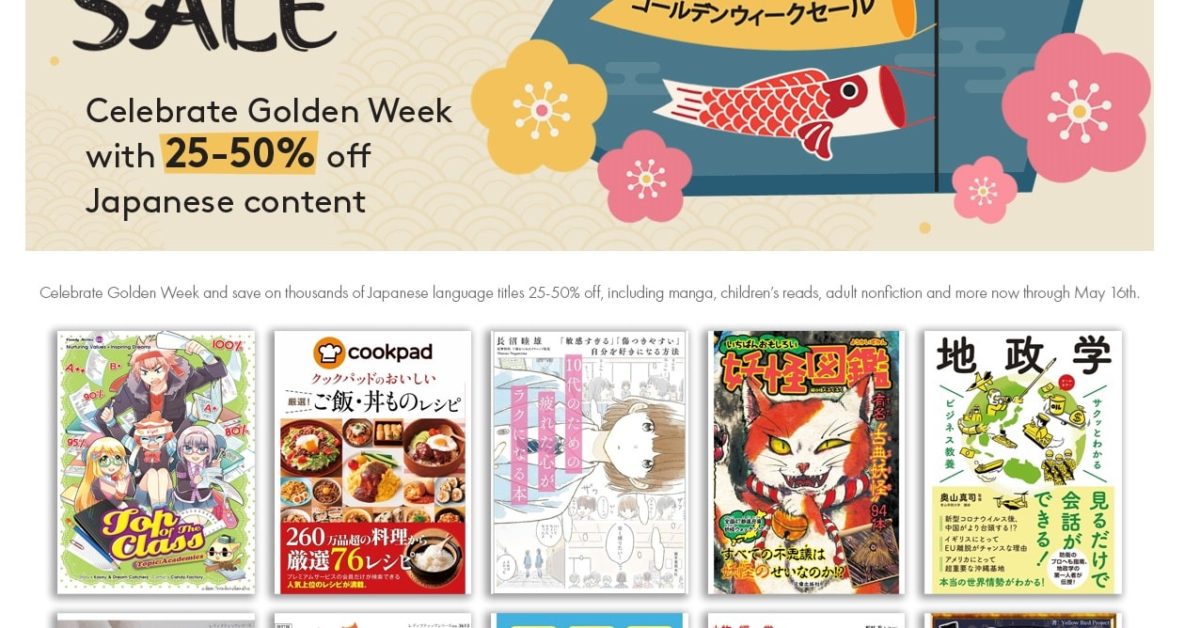 Media Do International Inc., the U.S. subsidiary of Media Do Co., Ltd., Japan’s largest e-book distribution company, has announced the expansion of Japanese titles available on OverDrive, the leading digital reading service for libraries and schools around the world in time for Golden Week, Japan’s biggest national holiday.

OverDrive’s Golden Week Japanese Content Sale highlights the catalog of more than 20,000 manga and literary titles in Japanese and a selection of works translated into English (manga). This set of exclusive eBooks is now available to libraries and schools around the world in a wide range of categories, including acclaimed bestsellers, popular adult fiction/non-fiction, children’s storybooks, educational books and manga. Exclusive titles include classic children’s comedy manga The brave frog, a Fujio “Gag Manga King” Akatsuka anthology, literary classics, guides to photography, solo camping, travel, and more. Patrons at participating libraries can read and enjoy titles through OverDrive’s Libby library reading app, and students at participating schools can read through the Sora student reading app. All OverDrive titles in these categories are available for libraries to purchase at 25% to 50% off for a limited time.

“The expansion of the OverDrive catalog provides libraries, educators, and readers with access to an exceptionally diverse and substantial selection of Japanese-language titles by acclaimed authors, creators, artists, scholars, and storytellers. These works provide libraries with compelling content to engage the large Japanese diaspora living overseas, bilingual readers and those learning Japanese, as well as dozens of manga fans,” says Daihei Shiohama, President and CEO of Media Do International.

OverDrive’s Golden Week Japanese content sale coincides with Japan’s annual celebration of national holidays known as Golden Week, which begin Friday, April 29.and and until Thursday, May 5and and include Shōwa Day (April 29), Constitution Day (May 3), Greenery Day (May 4), and Children’s Day (May 5).

OverDrive serves 76,000 libraries and schools in 94 countries with the largest digital catalog of eBooks, audiobooks, magazines, comics, videos, and other publishing industry content. In North America, OverDrive partners with approximately 90% of public libraries and over 52,000 schools and is one of the most widely used digital e-book platforms.

“Manga is one of the most popular categories for libraries, and English-language versions of popular series such as BAKI, KILL HER KILL, PERSON 3 and PERSON 4, SHAMAN KING, SHOKU-KING, STREET FIGHTER, GTO, and many others appeal to a vast legion of avid manga readers who are also library customers and Libby app users,” adds Winnie Li, Business Development Manager for OverDrive.