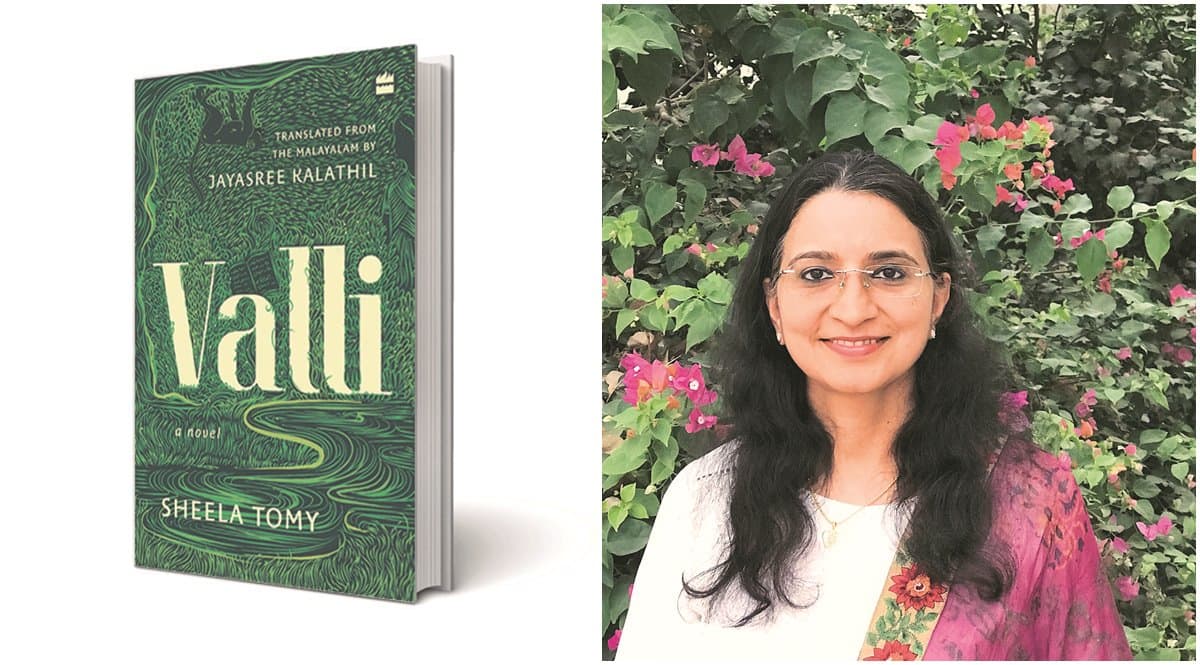 My village is every village in the Western Ghats – exploited by human greed: Malayalam writer Sheela Tomy

Malayalam writer Sheela Tomy migrated to the Middle East more than two decades ago from Wayanad, where she grew up as the granddaughter of settlers from the former Travancore region of Kerala. Valli, Tomy’s first novel published in Malayalam months before the coronavirus pandemic, is about the mountainous district of Kerala nestled in the Western Ghats which is now facing an environmental disaster. Before the release of the English translation of the novel, Tomy speaks with Faizal Khan about the novel and its characters. Edited excerpts:

What was the starting point for the novel, given that Valli is your first novel about Wayanad in Kerala written as an immigrant in the Middle East?
I was born and raised in a Christian migrant village in Wayanad, a village of rice fields, coffee and black pepper. My grandparents migrated to Wayanad from Thiruvithamkur (Travancore) in the 1950s. I grew up listening to stories of migrant struggles for survival alongside many myths and beliefs from the wild land. I wanted to dedicate my first novel to my land, my people and their untold stories. My father was a teacher, but his father and uncles were farmers. My childhood witnessed all the miseries of Wayanadan life. Valli is a reflection of all this and the changes that followed. Before I started writing Valli, I did a lot of research on the land and its people. I wanted to reflect the transformation of Kalluvayal (a village in Wayanad which is a major character in the novel) over the past five decades from a densely forested land to a dry land with no rice paddies, no biodiversity, the Adivasi people who once fought for the valli (wages) were still fighting for the valli (the land) and the farmers on the brink of suicide.

Is Kalluvayal, the village of Wayanad where the novel takes place, a real place in the hill region?
Kalluvayal is a real place. It is my own village where I was born. It is also all the villages of Western Ghats. Wherever nature is exploited by human greed, there is a Kalluvayal. Kalluvayal is universal. In the letter to Tessa, Susan’s daughter whose diary is growing, the author says: “All that was in Susan’s Kalluvayal, and some of what was not, is in this book.

Recent artistic works based on Wayanad, for example, the independent film, Paka (River of Blood), the feature debut of Film and Television Institute of India alumnus Nithin Lukose, who was also born in the neighborhood like you , focus on the story of its rival families who settled from Travancore in the 1960s and 1970s. What were the forms of expression that you initially grappled with in telling the stories of the people of Wayanad?
Nithin Lukose is from my district and we are related. Paka, as I understand it, focuses on the feud between two families who migrated to Wayanad. Valli has a much wider canvas. It addresses nature, the forest, its inhabitants, migrants as well as the indigenous peoples of the forest, the politics of the territory, etc. Valli’s story takes place in a village of Christian migrants. The Bible and the church played an intimate role in their lives. Therefore, the dialect of the Christian communities is used and the Bible verses are largely adapted. Wayanad tribal communities have their own languages, songs, myths, rituals and cultures, reflecting their beliefs and dreams. I have included the Paniya language which has no script and their folk songs in Valli, with the kind support of an expert, Saritha Chandran.

Were there any major influences in creating the structure, style, and aesthetics of the novel? Gabriel Garcia Marquez is mentioned a few times in the book.
As a reader, I really enjoyed reading Marquez. Arundhati Roy’s style in God of Small Things and Pedro Paramo’s structure of (Mexican writer) Juan Rulfo are some of my favorites. I don’t know if they influence my writing. From Malayalam, I love Sara Joseph’s style and her poetic writing matches my aesthetic. I aim to create my own style and even like to adopt different styles for each work depending on the subject.

There are powerful literary references, famous Malayalam novels like Chemmeen by Thakazhi Sivasankara Pillai, Balyakala Sakhi by Vaikom Muhammad Basheer and songs from popular films of the 1970s, many of which reflect a radical grip of the society of that time. Yet the Communist Party is a marginal element in the novel which begins with the death of the Naxal leader Varghese. Your comments.
Balyakala Sakhi and Chemmeen are all-time favorite novels and popular household names even today. The 1960s and 1970s were the golden age of Malayalam film songs. People enjoyed movie songs on the radio and it was part of their life. They loved, dreamed, cried and laughed through these songs which were beautiful poems written by the poets of the time. Valli aims to paint a picture of the lives of ordinary people. My goal was not to write about the activities of the Communist Party or the Naxal movement. But the life of Padmanabhan and Peter tells how the party has interfered in their lives. A novel set in the socio-political situation of Wayanad in the 1970s cannot forget Comrade Varghese.

The violent history of Wayanad settlers has often portrayed grandmothers, who have been most affected by migration, as playing a vital role as intriguers in the violence. What does your research tell you about this, since your novel is a vast canvas of powerful and vulnerable female characters?
Women are subjects and objects of violence in patriarchal contexts, and some may be complicit in the violence. In fact, women have played a crucial role in the history of migration. They played an equal role with men in transforming raw forest land into farmland. Women’s resistance to the destruction of nature is a recurring theme in the novel. Women and nature are expected to silently accept exploitation, but they refuse to do so. Valli has many female characters embodying strength as well as vulnerability. None of them are plotters of violence, but fighters for survival, as I have been able to find in my country.

Finally, please share one or two arguments or laughs from your curious collaboration with acclaimed translator and author Jayasree Kalathil. You both live abroad on different continents.
I so wanted that one day the world would read the stories that only my forest village of mist and mystery could tell. There are no words to express my happiness when Jayasree Kalathil approached me to translate Valli. When we started to interact, I found her to be a like-minded person and enjoyed working with her. We had debates which allowed me to sharpen my political convictions. Jayasree’s translation was far beyond a literary recreation and even rethought the idea of ​​the original text. I am grateful to Jayasree for translating his soul, his politics and his poetry so well.

(Faizal Khan is a freelancer)