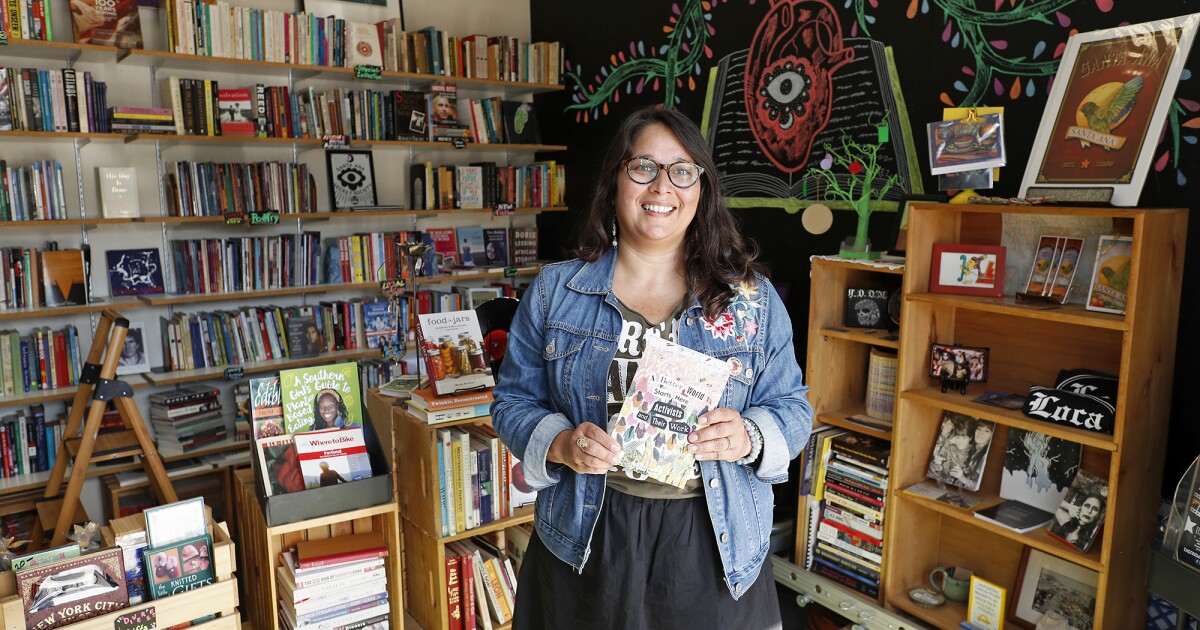 When author Sarah Rafael GarcÃ­a’s LibroMobile started taking up space in an alleyway in Santa Ana next to 4th and Spurgeon streets, the goal was to cultivate diversity through books. The last year has been about how to occupy online space to survive.

LibroMobile Literary Arts Festival will go virtual on January 23 from noon to 8 p.m. The free one-day event will feature a mix of live readings, workshops and music.

While preparing the festival lineup, GarcÃ­a and Marilynn MontaÃ±o, the bookstore’s social media and events coordinator, focused on local artists and guests who have supported the Santa Ana Bookstore or who have raised the voices of the Black and indigenous people of color.

Viewers can expect recommendations from books, art vendors, and businesses, Drag Queen Story Time, from a Vietnamese American Arts and Letters Association. collaboration and a performance of the group Apollo Bebop.

David Lopez, a queer Latino writer and librarian for the OC Public Library, will receive the Modesta Avila Award.

The original iteration of LibroMobile, which still exists, started out as a repurposed garden cart traveling across the region – in the same vein as a street food cart. A year later, GarcÃ­a moved into a 200 square foot bookstore and started a festival.

â€œUntil 2018, I hadn’t even featured in my local library as a writer or author, even though my first book came out in 2008,â€ GarcÃ­a said. â€œExperiencing this brings a lot of trauma because you are so proud to come from this community. We go back to what inspired us to be who we are, and it was usually our childhood hometowns, our culture, the relevant role models we had growing up that encouraged us to be the artists or writers we were. are – yet the city does not take pride in that.

Organizers said the motivation behind the festival was not only to create a platform that creates visibility for local writers and artists, but also to invest financially in Santa Ana. GarcÃ­a made a point of paying the festival artists as much as LibroMobile could with a modest stipend. Staff members such as book consultants and web content managers, who are either local artists or youth, are paid by book sales and grants.

The bookstore has not been open to the public throughout the coronavirus pandemic. Instead, all efforts have gone virtual.

â€œIt was really difficult for me because I’m 46 and I did my undergraduate education before the internet existed. I’m not someone who is Instagram savvy, I haven’t even used [IG] stories before the pandemic, â€GarcÃ­a said.

She held every week Instagram TV Shows and is organizing the festival on the same platform this year.

In mid-2020, GarcÃ­a hired Xochitl Vallez as a web content manager to help the bookstore transition to selling online.

Vallez first met GarcÃ­a in 2009, when she was 13, through Barrio Writers, a free college-level creative writing program for teens. Vallez’s single mother wanted her and her sister Anatalia Vallez (who published a book last year) to have a place to go during the summer, and she found the program advertised in a flyer via Libreria Martinez, a Santa Ana bookstore which closed in 2012.

Vallez was diagnosed with rheumatoid arthritis a year before participating in Barrio Writers. She said her diagnosis changed the course of her life. She was having trouble getting to class and having the energy to participate. She ended up completing her high school education completely online. Now that she’s taking various courses at community colleges, she wonders how her education might translate into a job in the near future.

â€œMany people with disabilities have been asking for years to be able to work remotely,â€ said Vallez. â€œFor me personally, my body is wrong when I ask it to. It doesn’t work that way. Many places have denied that this [remote way of working] was productive. Apparently, this is doable when able-bodied people need to connect to the Internet.

The current work she does through LibroMobile allows her to work remotely with flexible hours. Vallez played a key role in managing the online catalog of books for sale and producing websites. She is also considering how to incorporate more technology for accessibility.

Some of the bookstore’s most recent online programs include book reviews contributing writers and a Podcast is expected to launch next month, which will be available with audio transcripts.

â€œWe didn’t realize that we were ignoring a whole other population of readers and book lovers when we weren’t virtual,â€ GarcÃ­a said. “It’s been a huge lesson learned and it’s something we’ve said no matter what we’re going to go on.”

If you are going to

Support our coverage by becoming a digital subscriber.