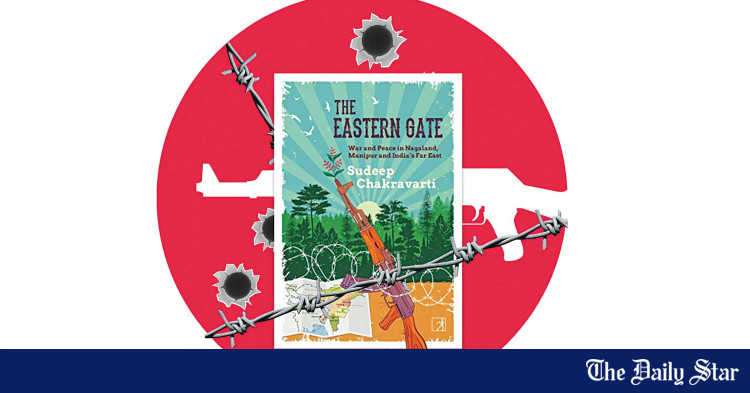 Is there a way out of the ethno-political cauldron of the Indian Far East?

Ever since I read The Bengalis: A Portrait of a Community (Rupa Publications, 2017), I have been looking for non-fiction books written by Sudeep Chakravarti. What drew me to his approach to non-fiction is not only the wide range of research material he brings to the table, but also the way he combines research with creative non-fiction, then tells the story in its own unique and fluid yet impactful way. But when Sudeep’s The Eastern Gate: War and Peace in Nagaland, Manipur and India’s Far East landed on my desk, I was faced with a dilemma. While The Bengalis and Plassey: The Battle That Changed the Course of Indian History (Aleph Book Company, 2020) is well within my areas of interest, I cannot say the same for this one.

It was the lingering taste of The Bengalis that made me skim over the first pages of The Eastern Gate (Simon & Schuster, 2022). After describing why this region is India’s gateway to realizing its eastern ambitions, Sudeep cuts to the chase, stating that the Naga peace process is key to establishing peace in Nagaland and Manipur, and “to a lesser extent in Arunachal Pradesh and Assam”. Its aim is to examine options for crafting a workable peace agreement that does not rise and fall out of step with the government’s ‘Look East’ or ‘Act East’ policy but which sees ‘things from the perspective of this region”.

For all the latest news, follow the Daily Star’s Google News channel.

Throughout the book, between sections of a chapter, appears in italics what Sudeep calls in a note at the very beginning “a ‘dispatches’ element”, which introduces itself into the narrative “the news…the information and messages received and exchanged, notes, and thoughts as preparation for writing…”. This element adds a unique flavor to the book, often taking on a satirical tone, the kind of which I have yet to encounter in intensely deliberative non-fiction work.

As the first chapter begins with a mysterious arms dealer who presents the author with a collection of miscellaneous weapons, Sudeep’s prowess in narrative nonfiction becomes apparent. His account is as detailed as that of a journalist, as in-depth as that of a researcher, and his narration is as literary as that of a writer of fiction. From the mysterious dealer, Sudeep takes us into the bowels of Moreh’s dark underbelly. Moreh is the conduit for weapons, drugs, contraband and other contraband between India, Myanmar and China.

While sharing details of interviews with security personnel on drug trafficking, he writes: “They highlighted the involvement of at least a dozen rebel groups of all ethnic beliefs such as Naga, Meitei, Kuki and Zomi, active in Manipur; and that political, bureaucratic and security establishments. All feed on the narco-economy. All want to control it. All find accommodation, find a level.

As I traveled through this vast terrain, I realized that the area has hundreds of political and historical ramifications. The ethno-political mix, as Sudeep calls the political situation, is combustible and has always been so since the 1940s. Ethnic groups with some influence derived from their “demographic weight” have their own rebel groups which, by default, opposed to rebel groups of other ethnic beliefs. For example, the rebel factions Meitei and Kuki are at war with the National Socialist Council of Nagaland (NSCN), in particular with the NSCN (IM). In many cases, an ethnic group has several factions fighting each other to the bitter end. Consider the deadly battles between the NSCN (IM) and the splinter faction NSCN (K).

As the “dispatches” demonstrate, Sudeep knows this terrain as intimately as one knows his hometown. Much like a master storyteller unravels the various interconnected stories in a novel, layer upon layer, Sudeep unravels the issues underlying the multilevel conflicts in this region. As Sudeep guides the reader through this region, the political ramifications multiply and are likely to encounter missing links. At this point, what I found most remarkable was Sudeep consciously removing a chronological approach; rather, it combines dispatches, interviews, creative non-fiction, analysis and research in a non-chronological way that provides all the missing links in addition to making people want to know more about future developments.

In the end, it all comes down to the alternative arrangement and the framework agreement. Alternative Arrangement (AA) is a “request by several Naga tribes under the aegis of the United Naga Council…to be separated from the administrative sphere of the government of Manipur to deal…autonomously with the central government of New Delhi”. The FA was signed in 2015 between the Indian government and the NSCN (IM) with the aim of ending the conflict with the Naga rebels and finding a solution to end “a difficult ceasefire with IM signed in 1997”. It wasn’t long before it became apparent that the FA was one more piece on the region’s ‘chess game’.

Sudeep’s book, which combines multiple disciplines with a creative approach, marks a rare achievement in the genre of non-fiction. Whether one is interested in the history of the partitions or the geopolitics of this region or more particularly in the North-East, it will be necessary to consult this book which, for sure, will provide them with all the details, data, perspectives and analyzes which they may need to know.

Rifat Munim is a Dhaka-based writer, editor and translator.

7 things you need to know