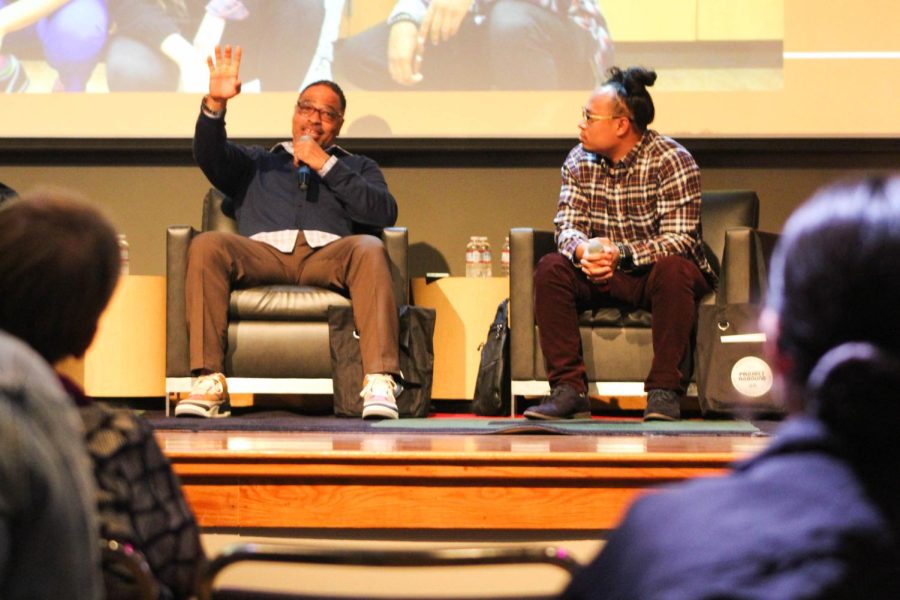 About 30 people gathered at Jack Adams Hall on Friday to participate in a roundtable with “Uncuffed” members and to attend Project Rebound’s fifth annual mural celebration on “Incarceration on Release”.

The panel discussed how they work to change the narratives society has created for them, and how programs like Project Rebound can help change that narrative.

Tran, who served 10½ years, is an organizer, artist and Senior Fellow at the Ella Baker Center for Human Rights. He began this work inside San Quentin State Prison.

“The unique thing about San Quentin State Prison is that they had media,” Tran said. “We had movies, we had podcasts, we had radio, we had a newspaper, literally everything we did in that media room was about reclaiming the narrative.”

Ross was released from prison last April. In the 36.5 years he served, he managed to earn his Associate of Arts degree from Patton College, Oakland in 2019.

He is now a student at Laney College, an ambassador for UC Berkeley Scholars programs, and works for organizations such as Guiding Rage Into Power and Restorative Justice for Oakland Youth.

“Controlling the narrative means telling my story in a way that is real and true to me, not how the state of California sees me or sees me,” Ross said. “When you talk about education, education also controls the narrative.”

“Without Handcuffs” is a podcast produced, recorded, and edited at San Quentin and Solano State Prisons.

The project began in 2012 at the initiative of the producers of KALW with the support of the California Arts Council’s Correctional arts program. Its aim is to provide media training to incarcerated people, so that they can have a platform to tell their own stories.

Additionally, it is funded by the Rehabilitation Programs Division of the California Department of Correction and Rehabilitation. The initiative offers visual, literary, media, performing and traditional arts.

Panelists and attendees also celebrated the Project Rebound mural located on the terrace level of the Cesar Chavez Student Center.

The mural represents the similarities people have experienced in prisons and the stereotypes that plague formerly incarcerated people. Friday’s event was a celebration of the work people have done through the Rebound Project.

During the discussion, Tran spoke about the trauma incarcerated people go through and what he believes is the best way to heal.

“One of the most healing things you can do is let it out or whatever art form it is,” Tran said. “Whether it’s painting a beautiful mural, whether it’s a podcast, whether it’s music.”

“We didn’t always think positive and productive,” Feaster said. “We used to think negative. I try to be vulnerable. I’m trying to look you in the eye now.

Tran wanted to send a message about formerly incarcerated people trying to get back to everyday life.

“One of my biggest struggles is teaching people to be patient with me,” Tran said. “I’m learning and doing my best, I promise you, I’m doing my best.”