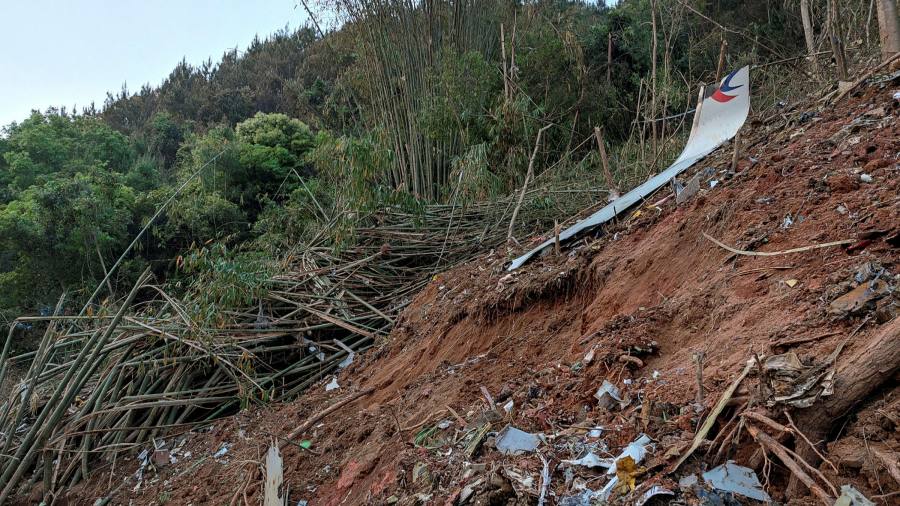 Hello. This article is an on-site version of our FirstFT newsletter. Sign up for our Asia, Europe/Africa or Americas edition to get it delivered straight to your inbox every weekday morning

A Boeing 737 jetliner with 132 people on board crashed in southern China yesterday in what threatens to be the country’s worst air disaster in years.

China Eastern Airlines said flight MU5735 crashed into a mountain range in Guangxi province an hour after takeoff. The flight was traveling from Kunming to Guangzhou City.

No information on the victims or the cause of the accident was immediately available. Flight tracking websites showed the route was taken by a 737-800 and not a Boeing 737 Max, which was grounded in 2019 after two fatal crashes. Shares of the US aircraft maker fell more than 7% to $181 in morning trading in New York.

Chinese state media quoted China Eastern as saying it would ground all of its 737-800s from Tuesday. Data from the Flightradar24 tracker showed the six-year-old plane was traveling at 29,100 feet before it began to rapidly lose speed and altitude.

The flight was carrying 123 passengers and nine crew members, according to the Civil Aviation Administration of China. The aviation regulator said it had activated its emergency response measures and was dispatching a team to the crash site.

Thanks for reading FirstFT Asia. Send your comments on this newsletter to [email protected]. Here’s the rest of today’s news — Emily

The war in Ukraine:

Keep up to date with the latest developments from Ukraine on our live blog and follow the invasion of Russia in the cards.

Five other stories in the news

1. Hong Kong suspends Evergrande trade Shares in the world’s most indebted property developer were suspended yesterday pending the release of “inside information”. The company has borrowed more than $20 billion in dollar-denominated bonds

2. Saudi Arabia ‘will not bear the blame’ for global oil shortages Saudi Arabia has said it will not be held responsible for shortages in the global energy market as it warned on Monday that missile attacks on oil facilities by Iran-backed Houthi rebels in Yemen would disrupt the supply.

5. Whistleblower alleges Johnson allowed Afghan animals to be airlifted Boris Johnson personally authorized the airlift of staff from a Kabul-based animal charity, a former British serviceman, when the Taliban took control of the Afghan capital last year, according to a whistleblower from the British government.

IPO of Nahdi Medical Shares of the Saudi pharmaceutical company are expected to start trading. He is one of a growing group of Saudi family businesses, long reluctant to open their books to outside shareholders, who are now lining up to list stakes as the country’s stock market soars.

What else we read

Help wanted: Tech companies in Vietnam are looking for Chinese speakers The growing demand for Chinese-speaking Vietnamese employees is just the latest symptom of factories moving to the Southeast Asian country, as higher costs and risks in China have motivated companies in many countries to make the change. (Nikkei Asia)

How War Changes Business The war in Ukraine has already upended countless lives. Now this is also disrupting business models. With the exodus of Western multinationals from Russia and disruptions to the Ukrainian supply chain coupled with Covid-related disruptions in China, companies need to rethink everything, writes Rana Foroohar.

Citi Hires Future of Work Compromise A new hub for entry-level investment bankers that Citigroup is setting up in Malaga is innovative – and its progress will be closely watched. But ensuring its prosperity will require serious management efforts.

How Big Tech lost the antitrust battle with Europe Brussels is set to finalize tough legislation targeting the Silicon Valley giants, disabling their strategy of dominating markets and capturing billions of euros in revenue, despite desperate lobbying that has fallen on the ears of a deaf.

With Pachinko, Apple TV Plus delivered a series that was both global in scope and the most captivating yet. Adapted from the best-selling novel by Min Jin Lee, the new eight-part Korean family saga retains its literary texture. The detail is rich, the pacing deliberate, the characters complex, and the scenes are shot with a stillness that allows us to capture their beauty, writes critic Dan Einav

Thanks for reading and don’t forget you can add FirstFT to myFT. You can also choose to receive a FirstFT push notification every morning on the app. Send your recommendations and feedback to [email protected]

Newsletters recommended for you

The road to healing — The impact of Covid on the global economy, markets and businesses. register here

The week ahead — Start each week with an overview of what’s on the agenda. register here