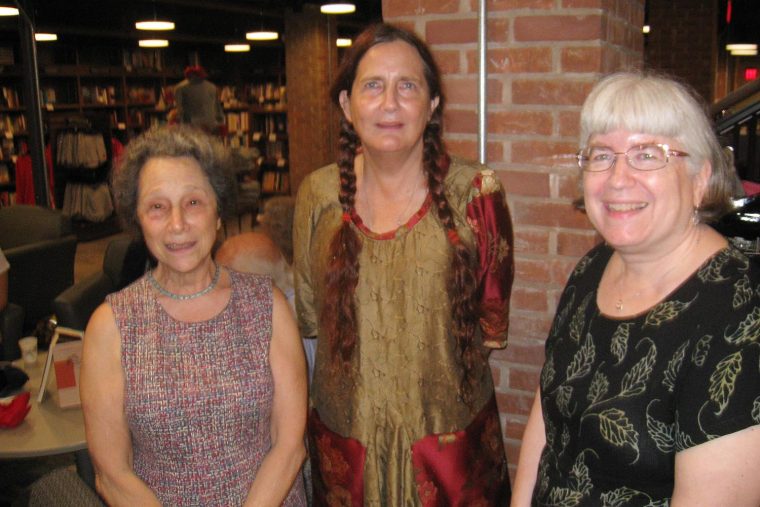 Two teachers and a former student celebrated the release of their new books at a rally on October 11 at the Wesleyan RJ Julia Bookstore.

All three books focus on Russian literature and culture.

Susanne Fusso, professor and holder of a chair in Russian, Eastern European and Eurasian studies, is the author of Editing Turgenev, Dostoyevsky and Tolstoy: Mikhail Katkov and the great Russian novel, published by Northern Illinois University Press in September 2017.

Priscilla Meyer, Emeritus Professor of Russian Language and Literature, is the author of Nabokov and indeterminacy: the real-life case of Sebastian Knight, published in August 2018 by Northwestern University Press.

And Katherine Lahti ’81, associate professor of linguistic and cultural studies at Trinity College, is the author of The Russian revival of the dithyramb: a modernist use of antiquity, published in May 2018 by Northwestern University Press. In Edition Turgenev, Dostoyevsky and Tolstoy, Fusso examines the literary career of Russian journalist Mikhail Katkov without defamation or canonization, focusing on how his nationalism fueled his drive to create a canon of Russian literature and sustain its recognition around the world.

In each chapter, Fusso examines Katkov’s relationship with a great Russian literary figure. In addition to Turgenev, Dostoyevsky and Tolstoy, she explores Katkov’s interactions with Vissarion Belinsky, Evgeniia Tur and the legacy of Alexander Pushkin. As an author of articles and editorials, Katkov presented a clear agenda for Russian literature: to assert the political and historical importance of Russian nationality as expressed through its language. As a powerful and enterprising publisher, he also researched, encouraged and paid for the writing of the works that were to embody this program, works that we recognize today as one of the greatest achievements of Russian literature. This groundbreaking study will fascinate academics, students and readers in general interested in Russian literary literature and history. Nabokov’s claims to author’s power are secretly undermined by his own narrative strategies which indicate the space between what is past and what is presented about that past through language. Such strategies, which highlight the separation between signified and signifier, are postmodern textual strategies. In Nabokov and indeterminacy, Meyer shows how these narrative strategies suggest that the awareness of the impossibility of finding the past is less a cause of despair than the opportunity for options. Critical textual strategies used include the use of mirror metaphors, not to assert representation, but rather to suggest ever-receding and multiplying images and the transformation of the epiphany from a moment of insight to an example of truth as a construction. In The Russian revival of the Dithyramb, Lahti offers a fascinating account of the early 20th century Russian resurrection of the dithyramb, a poetic form of verse and dance that the ancient Greeks performed to invoke Dionysus. It traces the surprising influence of form on Russian identity and art in the work of artists, writers and musicians as diverse as Aleksandr Blok, Andrei Bely, Aleksei Remizov, Vladimir Mayakovsky and Igor Stravinksy.

Lahti follows the continued popularity of the dithyramb after 1917, when it occupied a special place in Russian culture during the first years after the Bolshevik revolution. Demonstrating the influence of the dithyramb on the development of Russian avant-garde culture, this book reshapes our understanding of an extraordinarily dynamic period of Russian art and thought. Fusso, holding her new book, poses in a photo with her husband, Joe Siry, the Kenan Professor of the Humanities, professor of art history. The authors also signed copies of their books. (Photos by Joe Siry and Robert “Bo” Conn)

A conference on the castles of a giant of literary books |