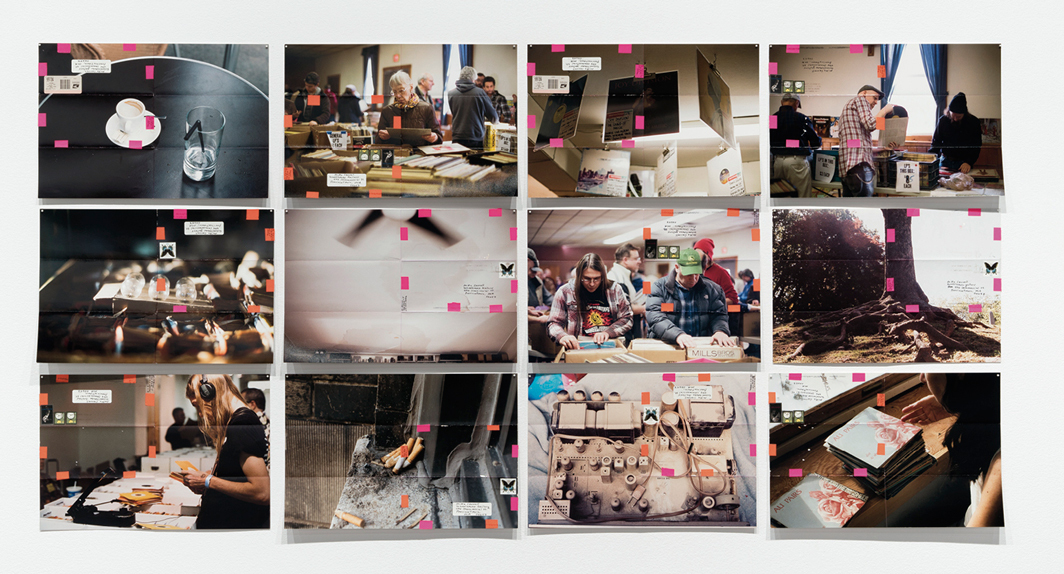 For photographer, author and filmmaker Moyra Davey, autobiography is a form of intertextuality. In some of the most insightful videos made over the past decade, numerous literary references map personal investigations into collective memory and history. Dressed simply and wearing a helmet, the entertainer paces her apartment in Manhattan’s Washington Heights neighborhood, reciting notes on a range of writers and thinkers. As her slender figure captures the golden light streaming through her windows, we absorb the radiance of Davey’s sentimental upbringing.

Exposure and lighting are, of course, the photographer’s tools. So is Davey from dust and trash. In this exhibition, which traveled to Montreal from the National Gallery of Canada in Ottawa, several photographic series delight in everyday life: New York subway users, empty whiskey bottles. Yet it is only on closer inspection that one realizes that the dark stain visible behind an exhausted bottle in Empty, 2017, is a baby; the series is also a desperate diary of motherhood.

Davey’s photographs, like days gone by, signify through the play of repetition and difference. They also create opportunities for correspondence and collaboration. In Trust me, 2011, Davey combines fragments of a novel by Lynne Tillman – SINCE INTEREST IN OTHER / PEOPLE IS ALSO AN / INTEREST IN YOURSELF – with images of his own ruined apartment. The juxtaposition poignantly conveys the neurotic obsessions that permeate our interpersonal relationships.

Loyalty to analog media—film photography, vinyl record collections, books, newsstands, snail mail—marks Davey’s commitment to the contingency and community of material modes of exchange. This concern is visible even in the modest, yet ingenious way in which she exhibits her photographs. To overcome the importance of shipping framed artwork, she simply folds her photographs into envelopes, affixes tape and address labels, and then mails them. To display these pieces, someone must cut the sealed tape, unfold the pictures, and tape them to the wall. Neatly arranged in the gallery at Concordia University – where the artist earned his BFA – his haunting paintings bore these index folds, along with constellations of brightly colored pieces of tape punctuating their otherwise neutral tones. His conceptual approach, refusing the pomp of the art world, becomes a formal praxis.

While understated references to Bruce Davidson, Walker Evans and Giorgio Morandi abound, Davey’s photographs strike us primarily as objects of transit. The encounters she captures – between light and glass, strangers on a train, or her son’s now adult childhood friends – insist that everything the texts must be read in a network of social relations. As the surprisingly visible names and addresses on his mailing labels attest, these affinities are not between rarefied works of art and anonymous institutions, but between individuals. Davey’s transmissions are like love letters, intimately exchanged between friends, family and fellow travelers, past and future.

Although works of art, like people, may travel the world in stamped envelopes for readability, we psychoanalytic thinkers generally favor content over container. In Davey’s mailings, these things become one and the same. However, you still can’t judge a “book” by its cover.

This shot bristles with renewed import in Davey’s video essay I confess2019. Continuation of Raoul Peck’s documentary I’m not your nigga (2016), Davey has embarked on a re-reading of James Baldwin’s novels. Her refusal to accept subordination led her to investigate the use of racialized speech in the Quiet Revolution against Anglophone domination in her native Quebec. In 1968, separatist Pierre Vallières used the N-word to describe the poverty and prejudice suffered by French-speaking white Quebecers in his political memoirs. white niggers of america. (The English translation of the book’s title was even more incendiary.) Yet Vallières’ misguided analogy is only a common thread in Davey’s confession of his own entanglement in liberation politics. Although part of the English-speaking minority, Davey endured the iron fist of the Catholic Church alongside his French-speaking classmates; one of her lovers abandons her to join the commune of Vallières. It was not until adulthood that the artist learned that his father, who was serving in Pierre Trudeau’s government, could have helped deploy the War Measures Act to violently repress Quebec separatists during the October Crisis of the 1970s. Seemingly sprinkled with shame, the resulting narrative projects the language of autobiography in a new light.

RM, do you like sweet potatoes? : When BTS Suga roasted RM