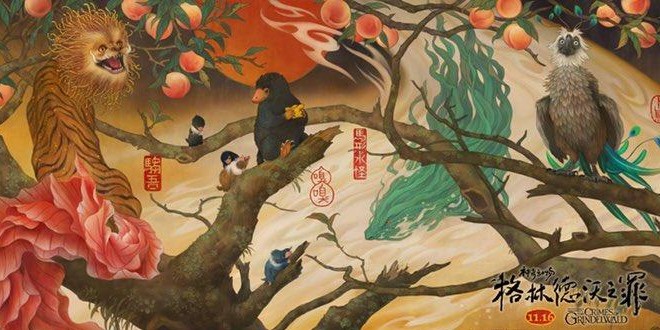 In the movie [Fantastic Beasts: The Crimes of Grindelwald] I include a Chinese creature. I was immersed in a bestiary of China – mythical creatures and so on with their various properties. So I can’t say too much right now, but I also use something from China in the next movie. So right now I have my head full of Chinese mythical creatures… I don’t want to say too much because I know what’s going to happen in the next story, but I think there are other interesting places where Chinese mythology can take us..

JK Rowling revealed in November 2018 that Chinese Beasts would be at the heart of Fantastic Beasts: Dumbledore’s Secrets. We know the Chinese bestiary to which she refers here because it has, at certain times in recent years, been visible on her web page – it is the Shan Hai Jing or, in the English translation that Rowling read: A Chinese Bestiary: Strange Creatures of Roads Across Mountains and Seas (translated by Richard E. Strassberg, 2002). Before the release of Crimes of GrindelwaldRowling said that “In Chinese mythology, there is a Chinese bestiary which is quite fascinating. The Zouwu is terrifying – if you’re a normal human – and to Newt Scamander – like a fat kitten. This is how it is described in Chinese mythology: a gigantic cat, the size of an elephant, with five colors. 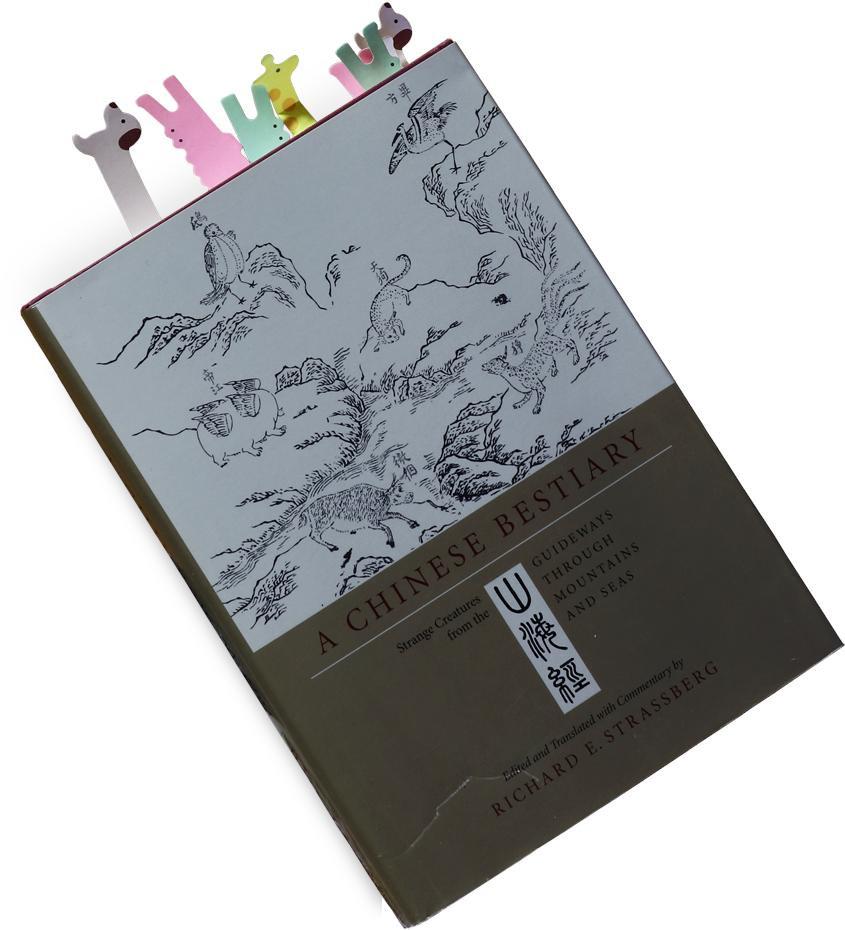 So in 2018 I started reading through the Shan Hai Jing and, to be frank, after reading more than two hundred gnomic descriptions of strange beasts, I was beginning to lose heart at the thought of ever finding the zouwu. He finally appeared as beast number two hundred and eighty-nine – hooray! – so, I can confirm that Rowling’s reading was indeed not a superficial overview. Here is the description of the Richard E. Strassberg translation (the version Rowling studied):

ZOUWU In the land of the Lin clan there is a rare beast as big as a tiger, with five colors and with a tail longer than its body. It is called the Zouwu. By riding it, one can travel a thousand li in a single day.

Rowling did not mention in the interview three of the other aspects of the zouwu mentioned here – that its tail is longer than its body, that it can be ridden, and that it can cover great distances in a single day – but she uses them all. Strassberg’s notes add some additional information:

Rare creatures similar to the Zouwu obtained from the Lin clan are mentioned in several other ancient texts, but with varying names and appearances. Guo Pu noted a myth in the Six Bow-Bags that is virtually identical to the one on Lucky-Measure. In this case, it is the Zouwu that is obtained from the Land of the Lin Clan and presented to King Zhou of Shang as a ransom for Bochang, the future King Wen of Zhou.

The idea of ​​the zouwu being used as a ransom for a future king has immediate storybook appeal (although we know that Newt would not use the zouwu for such a purpose), but nonetheless, the repatriation of the zouwu has sense as Newt’s ostensible reason will travel to China in Dumbledore’s secrets — just like he traveled to America in the first movie apparently to bring Frank the Thunderbird home. 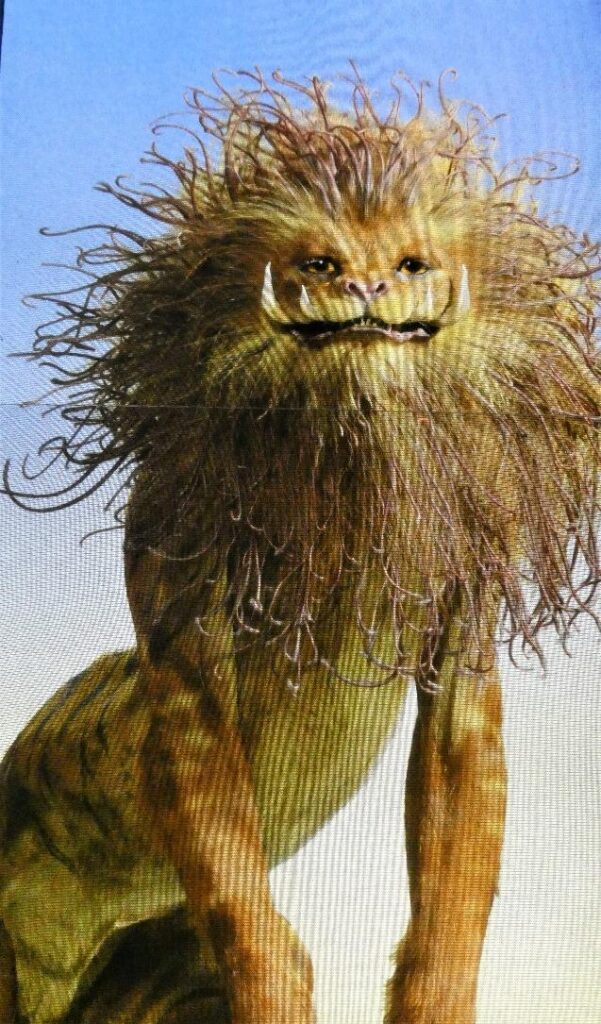 Rowling describes the Shan Hai Jing like “youutterly fascinating,” and it’s not hard to see why. It has a number of truly fantastic beasts – in both senses of the word. These include the fabulously named Completely Odd, which “looks like a tiger with wings. There are also pearl turtles (which are “a lung with eyes and six feet” who spits pearls); bong fish (“which have the basic shape of a turtle and sound like a goat”); the changfu (“whose shape resembles a chicken with three heads, six eyes, six feet and three wings… Eating it will prevent sleep”) and the five-color shadow bird that can obscure the sun, eclipsing entire cities, during its flight.

The most beautiful creature in this bestiary are the two-headed honghong rainbows – about which Strassberg notes:

Rainbows were thought to lack feet and tails. Their two heads may symbolize the conjunction of yin and yang energies, therefore they also functioned as poetic images of love. When they appeared above hearths, rainbows were generally considered auspicious… In some myths, they were associated with divine women. Rainbows have been classified into several varieties, and Yuan Ke suggested that Honghongs were specifically evening rainbows.

I doubt we’ll see this amazingly beautiful “beast” – but I thought about it when we saw the rainbow wings of the new bird that carries Newt. This wyvern matches the Muggle version of the beast in some ways (it looks like a dragon and has two legs, just like the wyvern in British heraldry), but it’s otherwise a whole new beast. One of those new aspects seems to be its rounded beak (perhaps inspired by the spatula Rowling used as a Twitter header in 2016). Another is her rainbow wings – and if these are reminiscent of the beautiful rainbow symbolism of the Shan Hai Jing then the appearance of the wyvern will bode well for Newt.

One of the main sources of Rowling’s knowledge of Chinese beasts, however, prior to her more recent reading of this ancient bestiary, may come from the work of Jorge Luis Borges. The book of imaginary beings (1957). There are other reasons to suspect that this book is a source of Harry Potterbut suffice it to say here that Borges’s bestiary shows significant overlap with the magical animals of the wizarding world – it details mandrakes, unicorns, phoenix, centaurs, cerberus, chimera, sirens, kraken and the sphinxes (all influential on Harry Potter) and the manticore, naga, salamander, and mooncalves (all appearing in fantastic beasts). Borges cites, for example, a beautiful rendition of Cerberus (the classic three-headed dog of which Fluffy is a modern incarnation) that may have influenced Rowling in choosing Fluffy as the first obstacle in her hero’s first quest:

This Three-Headed Dog denotes the past, the present and the Time to come; who receive and, so to speak, devour all things. Hercules got the better of him, which shows that heroic Actions are always victorious over Time, because they are present in the Memory of Posterity.

Particularly relevant for Dumbledore’s secrets, however, is Borges’ considerable attention to classical Chinese beasts. My last post tomorrow will be about the qilin and the phoenix – which seem to be the most important mythological beasts in the upcoming film. So I leave you with what Borges writes about the qilin, an animal he calls “The Unicorn of China.”

The Chinese unicorn, the k’i-lin, is one of the four auspicious animals; the others are the dragon, the phoenix and the tortoise. The Unicorn is the first of the 360 ​​creatures that live on earth. He has the body of a deer, the tail of an ox and the hooves of a horse. His short horn, which protrudes from his forehead, is made of flesh; its coat, on the back, is of five mixed colors, while its belly is brown or yellow. He is so gentle that when he walks, he is careful not to step on any living thing and does not even eat live grass but only what is dead. His appearance heralds the birth of a sovereign of integrity. Hurting the Chinese Unicorn or falling on its corpse is bad luck. The natural lifespan of this animal is one thousand years.

When Confucius’ mother carried him in her womb, the spirits of the five planets brought him an animal “having the shape of a cow, dragon scales and a horn on the forehead.” So Soothill relates the annunciation; a variant of this given by Wilhelm relates that the animal appeared on its own and spat out a jade tablet on which were read these words:

mountain crystal threads [or of the essence of water] when the dynasty crumbles, you will reign as a king without a throne.

Seventy years later, hunters killed a k’i-lin that still had around its horn a piece of ribbon that Confucius’ mother had tied there. Confucius went to the unicorn and wept because he felt what the death of this innocent and mysterious animal heralded and because in that ribbon lay his past.

In the 13th century, a reconnaissance expedition of Emperor Genghis Khan, who had undertaken the invasion of India, encountered a creature in the desert “like a deer, with a head like that of a horse, a horn on the forehead and green hairs on the body”, who addressed them saying: “It is time for your master to return to his country.” One of Genghis’ Chinese ministers, after consultation, explained to him that the animal was a chio-tuan, a variety of the k’i-lin. “For four years, the great army has been waging war in the western regions”, he said. “Heaven, which abhors bloodshed, gives warning by the Chio-tuan. Spare the Empire for heaven’s sake; moderation will give boundless pleasure. The Emperor gave up his war plans.

Twenty-two centuries before the Christian era, one of Emperor Shun’s judges was in possession of a “one-horned goat” who refused to attack the wrongly accused but struck the culprits.

It is universally accepted that the unicorn is a supernatural and auspicious being; so say the odes, the annals, the biographies of notables and other texts whose authority is irreproachable. Even the women and children of the village know that the unicorn is a lucky sign. But this animal is not among the farmyard animals, it is not always easy to cross, it does not lend itself to a zoological classification. Nor is it like the horse or the bull, the wolf or the deer. In such circumstances, we may be face to face with a unicorn and not know for sure that we are. We know that a certain maned animal is a horse and a certain horned animal is a bull. We don’t know what the unicorn looks like.

Dr Beatrice Groves teaches Renaissance English at Trinity College, Oxford and is the author of Literary allusion in Harry Potter, which is available now. Don’t miss her previous posts for MuggleNet – such as “Solve and Coagula: Part 1 – Rowling’s Alchemical Tattoo” – all of which can be found on Bathilda’s Notebook. She is also a regular contributor to the MuggleNet podcast. Potterversity.

Writing with cutting-edge literary analysis of the series, Bathilda’s Notebook explores the literature and ideas that most inspired Rowling, from Shakespeare to Sherlock Holmes.
Want more posts like this? MuggleNet is 99% volunteer run and we need your help. With your $1 monthly pledge, you can interact with creators, suggest ideas for future articles, and participate in exclusive giveaways!

Support us on Patreon