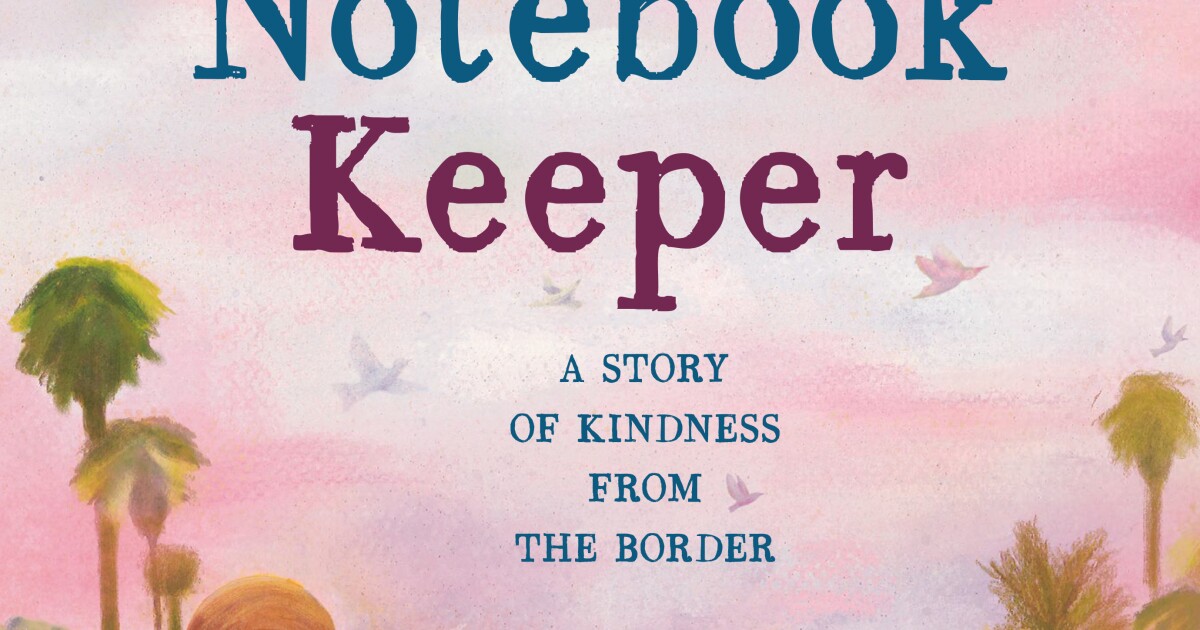 Like so many literary-inspired moments, Stephen Briseño’s light bulb moment came at the least likely time. To hear him remember, it was 2019 and he was returning home from the funeral of a close family member. Looking for some kind of distraction, he grabbed his phone.

“It was a very sad day for me, and I just didn’t want to be alone with my thoughts,” Briseño recalled from his home in San Antonio, Texas. “I just started flipping through my podcast app and picked one at random.”

The podcast he ended up listening to was an episode of “This American Life,” the popular radio show hosted by Ira Glass. The episode revolved around the Trump administration’s border policies. One of the people interviewed for the show was a woman named “Karen”, a migrant who served as a “notebook keeper” at the San Ysidro/Tijuana border, helping track refugees attempting to cross or seeking asylum. asylum in the United States Briseño says he was “so moved” and immediately thought it would make a good story for children.

“I just couldn’t believe there would be someone who would bring an ounce of humanity to the midst of all that horrible bureaucracy,” Briseño says. “It just floored me. Yes, I was angry that something like this happened, but I was also emotional about it. The story stuck with me for months.

Just over two years later, we recently published “The Notebook Keeper: A Story of Kindness from the Border”, a picture book that is as informative as it is heartfelt. The story centers on a young refugee named Noemi who, together with her mother, makes the dangerous and desperate journey to the border in hopes of crossing into the United States. While they wait, Noemi meets Belinda, a notebook keeper who helps keep track. refugees who wait days, weeks and months for a chance to cross.

“The Notebook Keeper” is the first picture book by Briseño, who also works as a middle school English teacher. He says he always knew he wanted to be a children’s book author, but struggled, as he puts it, to “find my path and find my story.” Still, Briseño says early drafts of the story were “too dry” and “too informative” until he had the epiphany to have the book told solely from Noemi’s perspective. He says he went through about 20 versions of the story before really focusing on the central characters.

“I would often bring it to my wife and ask her if I was being too mean or too tough,” Briseño says, explaining that early versions of the book contained much more commentary on US border policies. “What really became my goal was to convey the relationship between mother and daughter, and the relationship with the keeper of the notebook. It would give it heart, a purity, so that I could explore the larger question. Otherwise, it would have just been an onslaught of heaviness, even though it’s still a heavy story.

Once he finished the story, his publisher recommended illustrator Magdalena Mora, who has a number of picture books to her credit that deal with issues of equality and deportation. Mora is based in Minnesota, but says she traveled to the San Ysidro/Tijuana border to find inspiration.

“I was immediately drawn to the story, because I just hadn’t seen many picture books that were set on the frontier,” says Mora, who grew up in Chicago but often had her own experiences. along the border while visiting family in Texas and Mexico. “Even though the border checkpoints are different, there are still similarities in the feel of this one – the sense of expectation and urgency. That in-betweenness, that seething energy and statelessness. I just wanted to really capture that in a visual format.

The book works perfectly to capture a serious issue and present it in a way that is both empathetic and accessible to children. Using materials such as charcoal, colored pencils and vibrant pastel paints, Mora says she didn’t want her illustrations to be too “heavy”, not wanting the characters to look sad or desperate, but quite hopeful and resilient.

“I did a lot of preliminary research, looking at photos and articles, and one of the things that I often noticed was that often when people talk about the border, they always talk about the mass of people,” says Mora. “They lose the humanity of individuals when you present them as a mass. When I started illustrating it, we were still talking about caravans. So I really wanted there to be a lot of close-ups of the faces, distinctive faces and distinctive features, to bring that human element to it.

During the process, each time Mora sent Briseño a finished sketch, he says he “surpassed” anything he had ever imagined in his brain. Briseño’s tender story, along with Mora’s vibrant illustrations, paint a more nuanced and humane picture of migrant struggles, one that the author hopes will resonate with both children and parents.

“It didn’t occur to me at the time,” Briseño says when asked how adults might be enlightened by history. “I was so focused on reaching the kids. It wasn’t until my editor mentioned it – that it wasn’t just a children’s book, but for everyone.

“I feel like there’s a trend in picture books where we’re tackling heavier issues,” Briseño continues. “I’m Mexican American and I’ve never seen anything like this kind of story, so I didn’t want to sidestep it. I wanted it to be as central as possible, not just for the kids in the families that are going through this, but for a wider audience to see the humanity of what’s happening on the border, that it’s more than just politics.

Briseño has included an author’s note at the end of the book that explains the real circumstances of the carnet holders and how the system ceased once the border closed during the COVID-19 crisis. But while the system itself may be gone, the issues featured in “The Notebook Keeper” will sadly remain.

“It’s unfortunate that this is an evergreen topic,” Mora says. “The nuances can change, the details and the laws, but it’s been a topic of discussion since I was a child and long before that. These stories will unfortunately continue to need to be told. I really hope it brings awareness.

Briseño is already hard at work on her second picture book, “Queen of Leaves,” a biography of Mexican-American botanist Ynes Mexia. Mora is currently working on a children’s book, “Still Dreaming,” about the Mexican Repatriation Act of 1929, which saw the mass deportation of Mexican-Americans from the United States. She also plans to work on a children’s book about Chicano Park with San Diego writer María Dolores Águila, slated for release in 2024.

For now, however, Briseño and Mora are excited to promote “The Notebook Keeper,” hoping it will resonate with readers young and old.

“Now that it’s been published, my goal is for adults and children reading it to see for a brief second someone else’s experiences,” Briseño says. “Too often the narrative is us versus them. I hope that by reading this, people will see that there is more to this story. That they are human beings with stories and hopes and dreams that are all tangled up in this mess.

“The Notebook Keeper: A Story of Kindness from the Border” by Stephen Briseño, illustrated by Magdalena Mora (Random House Studio, 2022; 40 pages)

Combs is a freelance writer.